History of the Town of Mount Pleasant

The following is an overview of the history of the Town of Mount Pleasant from its earliest foundations until the turn of the 20th Century.

Local tradition maintains that life in Mount Pleasant dates back to the mid-1700s, when a campsite call “Mount Comfort” provided a stopping place between Salisbury and “Charles Town.” Over the years this location became a stop for wagons on the route. It emerged as a small village in the 1830s, named Mount Pleasant because of its picturesque location and its high elevation between Adams and Buffalo Creeks. Incoming German settlers gradually gravitated to the site and by 1859 the population was sufficient for incorporation as a town.

Meanwhile, in July, 1852, the North Carolina Synod of the Lutheran Church, meeting at Concord, North Carolina, resolved to place a Western Carolina Male Academy at Mount Pleasant. This, after years of efforts to assure a supply of educated Lutherans for the clergy, made Mount Pleasant for a time an educational center. In 1859, the school became North Carolina College, and, in 1903, the Mount Pleasant Collegiate Institute as which it continued until it closed in 1933. A second educational institution in the town was the 1859 Mount Pleasant Female Seminary begun privately by Mrs. D.H. Bittle, wife of the president of North Carolina College, this school for young women was transferred to the Lutheran Synod in 1869. In 1892 the name was changed to “Mount Amoena Seminary,” which was retained until its closing in 1927.

In the period before the Civil War, Mount Pleasant, along with the rest of Cabarrus County remained on the perimeter of the State’s economic mainstream, although some benefit was derived from added roads and railroads. Small, self-sufficient farms were still the rule, but a cash crop agriculture was beginning to emerge as large amounts of cotton were being grown. Specific records for Mount Pleasant, as well as the rest of Cabarrus County, are sparse and prevent a detailed picture of the village for this period, but the significant number of houses from this period show the makeup of a trading community serving a rural area. The oldest property among these structures is that of a physician, J.L. Henderson, whose house dates from about 1840. This home continued as a doctor’s residence until after 1900. Another residence that dates from the 1840s is the home of a Lutheran pastor, John D. Scheck. The Reverend Scheck’s house was erected in 1844. The home of merchant Jacob Ludwig was also completed in the 1840s. The last, remaining, extant property is the home of farmer Lawson G., which was completed in 1858.

Mount Pleasant endured the disruptions of the Civil War, including a suspension of the college, and emerged as an intact community. Commerce made a modest increase as a larger volume and a wider variety of manufactured goods became available via Concord and the North Carolina Railroad. The town and its vicinity had three general stores by 1868, indicative of the growth of retail outlets throughout the county. There were also three grist mills to grind the local crops of corn, oats, and wheat into meal and flour. The next year, 1869, there were eight mills, and three doctors to serve the growing population. In 1872, there were four general stores with Mount Pleasant addresses: File and Harkey; Jones, Cook & Company, Kinerly and Cox; and Misenheimer and Company. The Lentz Hotel in operation since 1853, received competition from the Bangle House in 1878. By 1884, the number of area general stores reached seven, plus two druggists, a lumber merchant, and a liquor merchant. These structures in Mount Pleasant reflect the community’s diversification that began in the late nineteenth century.

This economic growth made it possible for Mount Pleasant to develop its institutional framework as well. The mention of the town’s first mayor and commissioners appears in 1884, but these offices were probably established earlier. The Lutheran Church of the Holy Trinity was erected in 1873. Prior to its completion, the congregation had met in the college chapel.

With a population of 550, Mount Pleasant in 1890 was about to embark on a period of manufacturing development that would be more significant than its earlier commercial expansion. Four major industries emerged in Mount Pleasant during this period. The first two, Kindley Cotton Mill (West Franklin Street) incorporated in 1896 and the Tuscarora Mill (southeast corner junction of East Franklin and Barringer streets) organized in 1899, were initially yarn mills. The establishment of these mills occurred simultaneously with a revival of the Cabarrus County textile industry. With the development of cotton as a staple crop, and with the revitalization of the North Carolina Railroad; towns with rail connections, such as nearby Concord, became textile industrial centers. Some of the Concord merchants, who deal in this activity became wealthy enough to launch their own manufacturing plants. One of the most prominent of these merchant-industrialists, James W. Cannon, founder of Cannon Mills, also established and served as the president of Mount Pleasant’s Tuscarora Mill. However, the Kindley Mill was a local enterprise, headed by farmer and merchant W.R. Kindley, and also included Lawson G. Foil, A.W. Foil, L.E. Heilig, J.L. Peck, A.W. Kindley, and the Reverend Paul Barringer as incorporators. Barringer was also involved with Cannon in the Tuscarora Mill. A German Reformed clergyman, Barringer retired from the ministry in 1900 because of a chronic throat ailment and devoted his energy to the textile industry, in particular the Tuscarora Mill and the Barringer Manufacturing Company in Rockwell that was established in 1907. The Tuscaroara Mill was organized in 1899, with Cannon serving as president and Barringer as secretary-treasurer. Other local investors in the Tuscarora Mill included John Foil, Lawson G. Foil, Jonas Cook and Augustus C. Barrier. Together these local merchants and farmers owned the controlling block of stock in the company.

The third major industry to solidify in Mount Pleasant was the Mount Pleasant Lumber Company (Jackson Street), which began to consolidate a number of local sawmills in 1897. John L.C. Miller and six other investors, formed a corporation, purchased the site of a saw and planing mill established by John Frick in the 1890s, and commenced business. Miller eventually bought out his partners and assumed complete control of the company in 1917.

The fourth major industry expanded in the same fashion as the Miller Lumber Company, only this time it involved local grist mills consolidating to establish one complex. The Mount Pleasant Milling Company (East Franklin Street) was constructed as a steam mill in 1908 by John and Lawson G. Foil. The Foils, with Jonas Cook, were proprietors of a general store in Mount Pleasant. The mill was purchased in 1918 by Charles Crowell and he converted the mill to electric power in 1922. Like its predecessors, the Mount Pleasant Mill Company first ground wheat, barley, oats, and corn.

In spite of this economic expansion base, Mount Pleasant continued in a decidedly rural ambience. A 1905 photograph shows a quiet dirt road with widely spaced houses making up part of the main street. More graphic are the Sanborn maps which show until 1906 the predominately spread out, small scale frame development of the Main/Franklin Street crossroad. A decisive limitation to economic growth was the lack of a direct railroad connection which tended to handicap Mount Pleasant’s textile industry. Hope for a rail connection continued up until 1912, but James Cannon reported to the Tuscarora Mill trustees in that year that all hope was lost, and he advised that the company therefore not expand.

Mount Pleasant has remained a small but usually prosperous town. Nevertheless, the bulk of the economic growth of Cabarrus County has taken place in and around the booming city of Kannapolis. Home of the major Cannon factories, Kannapolis grew from a 1905 beginning to a population of 12,000 by 1930, then about the same size as Concord. Mount Pleasant, meanwhile, had a population of 500 white and 150 black in 1910, which grew to only 1,182 as late as 1980. Property in Mount Pleasant, valued at $200,000 in 1910, tripled to $632,070 by 1930. Since 1910, the town has had a branch office of the Cabarrus Bank and has since added a chief of police to its public officials. Between 1911 and 1927, a business district solidified along the North Main and West Franklin Streets. The Mount Pleasant Collegiate Institute Historic District, named for the last of the three educational institutions which have occupied these buildings and grounds, comprises 7 buildings erected between 1852, when the NC Synod of the Evangelical Lutheran Church of America established the Western Carolina Male Academy, and 1933, when the Collegiate Institute closed its doors. Set among groves of trees on a hill overlooking the center of Mount Pleasant, the grouping was the first historic district in Cabarrus County to be listed in the National Register of Historic Places when it was established in 1980. The structures in the district include the Main Building (185 4-55), which currently houses the Eastern Cabarrus Historical Society Museum; the Society Hall (1859-59), a 2-story Greek Revival brick structure; the New Dormitory (1925), a 3- story brick building designed by Charlotte architect Louis H. Asbury; the Matthias Barrier house (1853), a 2-story Greek Revival residence that was the home of a prominent Cabarrus County farmer and educational leader; the President’s House (1855), a frame residence with Greek Revival details; and the boarding house (1868), a 2-story frame dwelling. 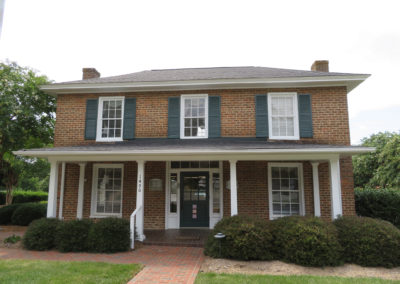 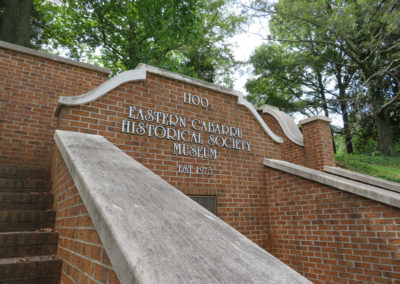 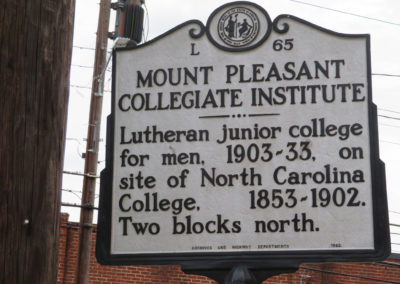 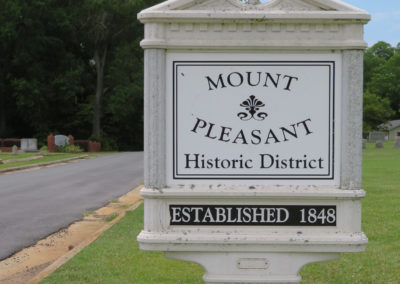 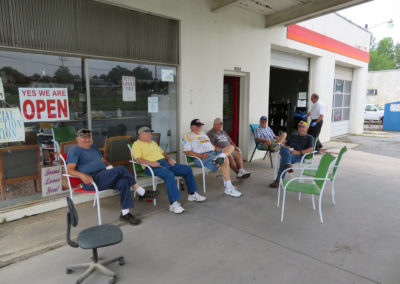 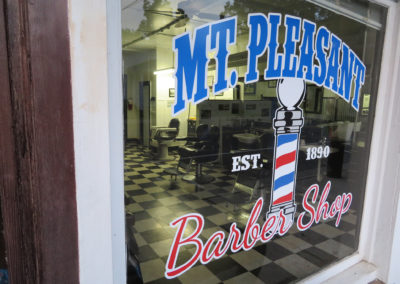 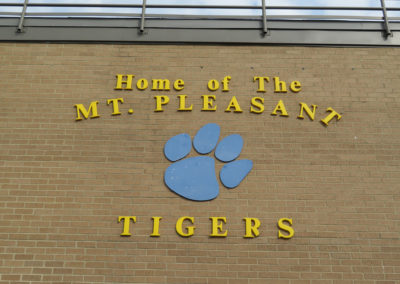 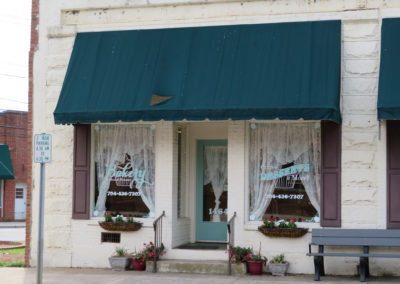 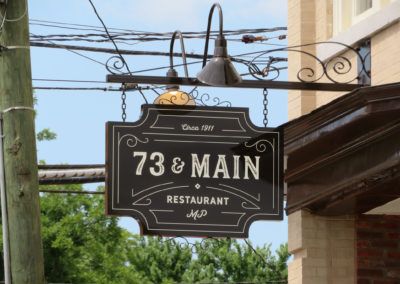 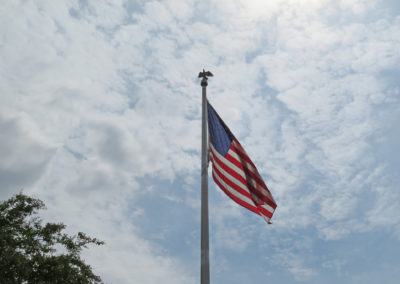 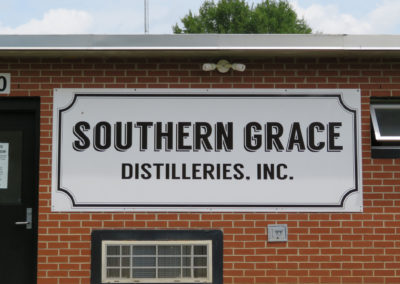 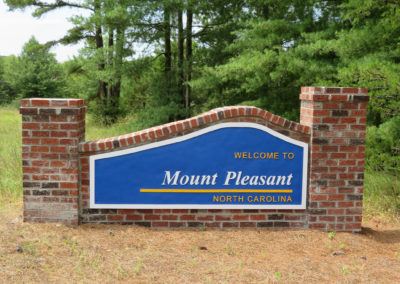 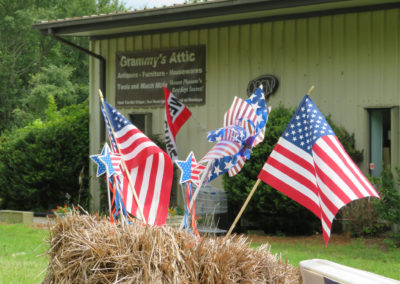 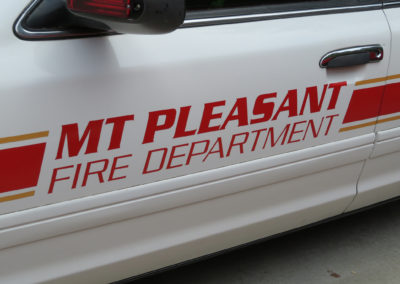 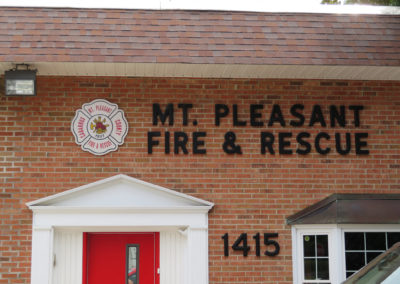 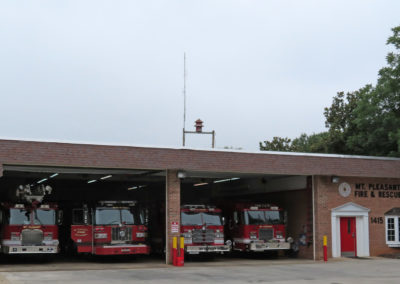 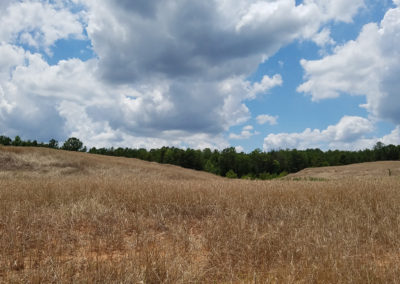 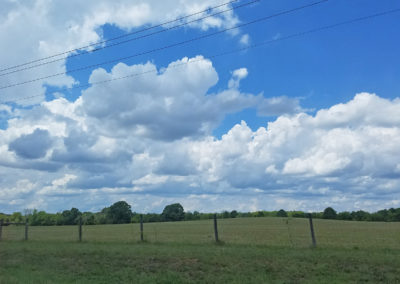 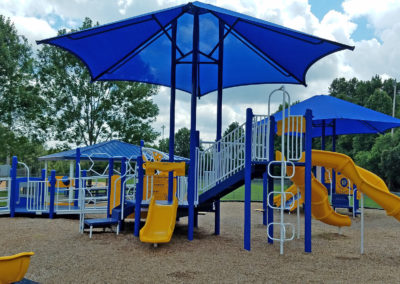 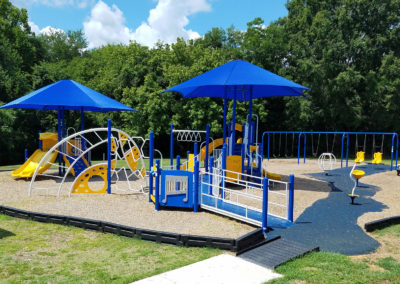 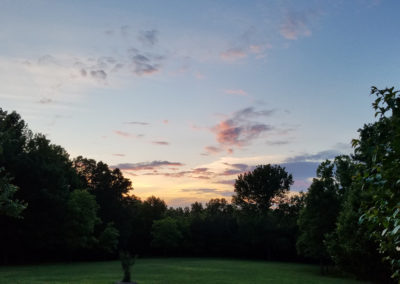